MANSORY presents the complete conversion "Le MANSORY" based on the Ford GT - the cult super sports car from America, which became a legend through the film "Le Mans

Under the motto "One car per decade", "Le MANSORY", which is limited to only 3 copies worldwide, forms another special edition on the occasion of MANSORY's 30th anniversary in 2020.

While Le Mans is already a place with a special racing history - and has already been ennobled by Steve McQueen with his film adaptation of "Le Mans" – the film “LE Mans 66” has once again focused on one of the most powerful and spectacular vehicles in automotive history.

So what could have been more obvious to refine the new edition of this legendary vehicle - which should not be missing in any renowned collector's garage worldwide - under the new abbreviation "Ford GT" by MANSORY and thus make it even more desirable? The result:

In Geneva 2020 MANSORY will present the "Le MANSORY" for the first time in a worldwide limited edition of 3 conversions in total, thus adding another exciting chapter to the rich history of the Ford GT.

The "Le MANSORY" shows unmistakably and impressively why the worldwide reputation of the complete vehicle conversions from MANSORY have become that which has distinguished the MANSORY brand for 30 years now.

The "Le MANSORY" convinces and impresses the observer at first sight thanks to its 5 cm wider full carbon body including its extensive changes in the aerodynamic area and makes the heart of every motorsport enthusiast beat faster.

In addition to the impressive first impression, the standard output of the V6 twin-turbo engine of 483 KW (656 hp) has been increased to a demanding and appropriate 710 hp by extensive modifications to the engine management system, enabling the "Le MANSORY" in combination with adapted aerodynamics to achieve a top speed of 354 km/h (standard: 347 km/h) almost effortlessly.

Chassis modifications and the use of forged rims of the dimensions 9x21" (front) and 12x21" (rear) type "YN.5" with corresponding high-performance tyres “Continental Sport Contact 6” round off the appearance in an elegant and harmonious way and also playfully master the massively increased performance.

However, the LED main headlights, which have been completely newly and exclusively developed for the "Le MANSORY", are of particular interest. This lighting system, which is divided into four individual headlights, gives the "Le MANSORY" a completely independent look, which on the one hand clearly distinguishes it from the standard, rather round Ford GT, but on the other hand also gives it the best possible citation and, thanks to newly drawn contours and enlarged air inlets, gives it the optical brilliance that makes the "Le MANSORY" so unmistakable.

In the interior, which Ford has kept rather spartan as standard, almost not one single component was left untouched by the MANSORY specialists - as is usual with all MANSORY complete conversions. While the car is dominated exclusively by the colour blue named "Bleurion Race" and the visible carbon fibre in dark grey, the interior of the dashboard and the sports seats are also lined in white-blue Alcantara. The numerous carbon applications distributed throughout the entire passenger cell complement and compose the interior into a harmonious whole.

The "Le MANSORY" is limited to 3 units worldwide. 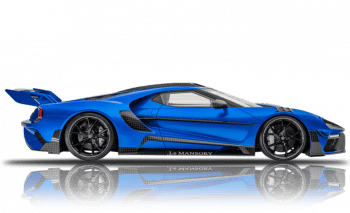 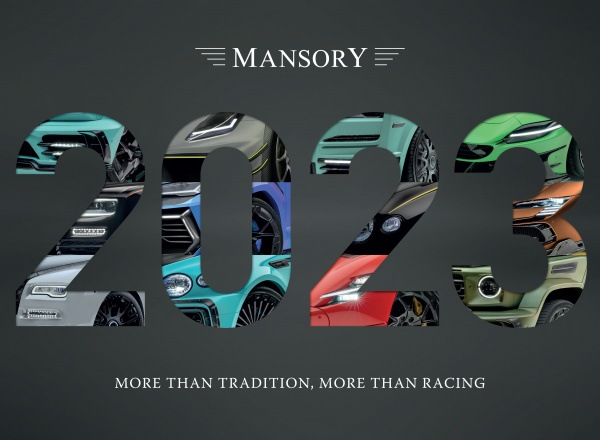